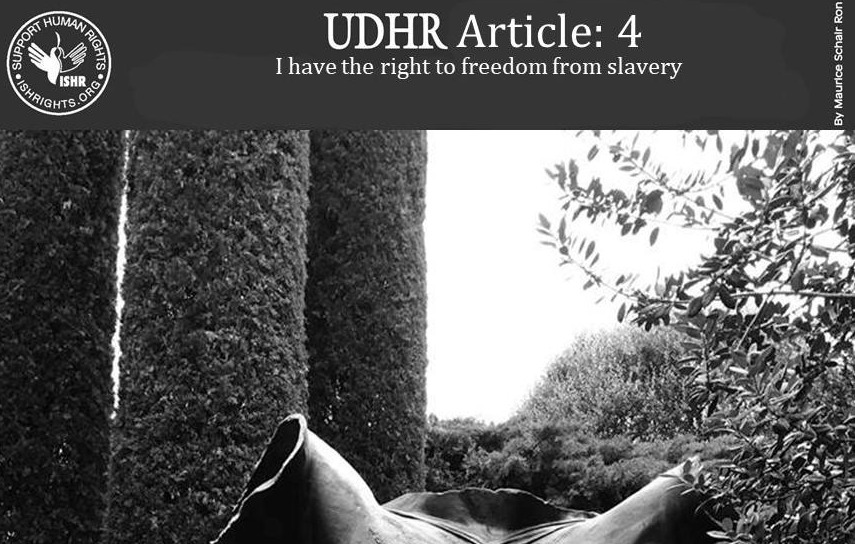 UDHR Article 4: No one shall be held in slavery or servitude; slavery and the slave trade shall be prohibited in all their forms.

In the 2016 it was estimated that 45.8 million people are in some form of modern slavery in 167 countries.

The countries with the highest estimated prevalence of modern slavery by the proportion of their population are North Korea, Uzbekistan, Cambodia, India, and Qatar. In North Korea, there is pervasive evidence that government-sanctioned forced labour occurs in an extensive system of prison labour camps while North Korean women are subjected to forced marriage and commercial sexual exploitation in China and other neighbouring states. In Uzbekistan, the government continues to subject its citizens to forced labour in the annual cotton harvest.

Those countries with the highest absolute numbers of people in modern slavery are India, China, Pakistan, Bangladesh, and Uzbekistan. Several of these countries provide the low-cost labour that produces consumer goods for markets in Western Europe, Japan, North America and Australia.

In the US the most common violation of the freedom from slavery right is in the labour trafficking area. The most reported venues/industries for labour trafficking included domestic work, agriculture, traveling sales crews, restaurants/food service, and health and beauty services.